Last night while teaching yoga on the fifth floor of a parking garage, I startled myself with a memory when I asked the class to roll to their right side, curl up, and pause between savasana, corpse pose, and pushing up to seated.

When I was a student, I hated when the yoga teacher asked that of me. I would defiantly barely move an arm to the right and slightly bend my knee. When it was time to sit up for the final words and class conclusion, I would throw my arms back and roll up to seated in one quick motion. Slow transition? For chumps, I thought. I hated the idea of resting in fetal position as if I were some weak adult attempting to regress into childhood. I never understood the reasoning. Savasana, I totally understood. A much needed reset for the body and nervous system, as well as a chance to quiet the mind after moving through vinyasa. Rolling over to your side like a dying dog at the end? That, I didn’t get. Why not just go from savasana to the final pose: sukhasana, easy seated position, without the added fetal position step?

Yes, that quote. The one that’s sometimes thrown in your face in a negative way, after you’ve sloppily cleaned your room or rushed through a task. Maybe that’s just my experience. Regardless, that quote came to mind last night as the class rolled to their sides and rested in the fetal position. Some of the class slowly and deliberately pushed themselves to their right flank, while others quickly shoved themselves over. The way they transitioned mirrored the way they had flowed through each posture during the class. No one avoided the pose, except for my ghost self that I pictured in front of me.

I think I rush through transitions because I am always beginning or ending something, and absolutely hate the in-between, the waiting, the pause—in life events as well as yoga.

Reflecting on this, I realized that even the way I show up to social or professional events is based on my avoidance of transition. I like to arrive exactly on time so that I don’t have to wait for the engagement to begin, or arrive early but wait in my car, alone, taking care of emails or other small chores while I wait.

My sister’s pet peeve with going to the movies with me is how late I like to arrive to the showing. I try to time exactly when the movie begins, rather than sit through all of the previews. Instead of relaxing and enjoying the buildup to the main event, I’d rather just jump in right at the start without any of the steps to get there.

Looking back at my life, I find that my avoidance of being “in limbo” has been a common thread for every one of my major life events. My inability to sit back and be patient has fundamentally shaped my life. From graduating college early, to my elopement, to many other pivotal points in my life—I’ve always chosen to blast forward rather than ease through a transition.

But yoga, as well as life, is found in these uncomfortable moments. The transition from urdhva mukha svanasana (upward facing dog) to adho mukha svanasana (downward facing dog) is one of those key, often rushed, moments where the transition between poses really matters. If you rush to make it to down dog, you miss the strength-building aspect for both your shoulders as well as your core. Not paying attention to the in-between of vinyasa transitions later affects your ability to master the advanced asanas, which build off of these small, often-overlooked moments of slow, strength-creating movement.

For me, and maybe you, that means slowing down in life as well as in yoga. Instead of jumping to the future, to the next thing, we need to enjoy the process and possible empty space between goals, life events, or career changes. Think about your favorite season (or seasons)—do you enjoy summer or winter the most? I have always disliked spring and fall, and the reasons for that have always been surface level (Oh, it’s too muddy, too rainy, too sad), but now I see that I’ve just disliked the slow and messy transition between the full expression of the season. Again, the in-between scares me with the possibility of stagnation and time spent in limbo. With the flash of insight that last night’s class sparked, I realize the need to meditate on the empty space in life, which truly isn’t empty. By slowing down and easing into the transition, I hope to witness the slow movement and subtle rebirthing that exists in the quiet moments of in-between.


He that can have patience can have what he will.Benjamin Franklin

Banner photo by Akhlispurnomo is licensed under CC BY-SA 3.0. 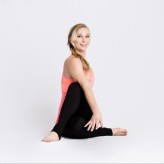 Nina is a writer, yoga teacher, visual artist, and an outdoor enthusiast. Originally from upstate New York, Nina has lived in various parts of the world as she served as an officer in the U.S. Army. Currently she's in the process of moving her life from Texas to Brooklyn, New York.

Six Yoga Teachings That Help at the Office