Heartspeak
April 18, 2017
by Annie Bingaman
0
I began practicing yoga as a freshman in college, almost ten years ago now. Like all relationships, my relationship with yoga has not always been a walk in the park. It has been full of ups and downs. It has been extremely fulfilling and, at times, full of strain and anxiety. There have been many months over the past decade when I never even stepped onto my mat. I wish I could say that yoga has never failed to make me feel enlightened and empowered but, on many occasions, my yoga classes have caused me to feel just the opposite. Yoga is an incredibly powerful practice and it has the ability to cause many equally powerful emotions to arise. Over the years, my yoga classes caused a great deal of deeply rooted personal trauma to resurface and many repressed memories to emerge.

“Yoga is an incredibly powerful practice and it has the ability to cause many equally powerful emotions to arise.”

For many years, I have struggled with depression. Though I have learned to cope with this, it still remains present in my life and a part of who I am. As a teenager, I experienced personal trauma. Trauma, especially sexual trauma, causes people to feel as though their body is no longer theirs. This is how I felt and, at times, how I still feel. When we experience trauma, we can feel detached from our bodies and as though we do not have control over our reactions and emotions.

Because yoga is such a physical practice, it can be very emotionally triggering for people who have been abused. One common trigger for folks who have experienced trauma is hands-on assists by teachers. While many students request and benefit from hands-on assists, some may feel intruded upon or judged. The latter was often the case for me, as many of the assists I received from instructors felt more like ridicule and condemnation than guidance or support. As someone who has struggled with self worth and self esteem, I often experienced assists as aggressive and critical. I found myself apologizing for not doing poses correctly, one of the many things I would apologize for throughout my journey to recovery. I would later come to discover that this pattern of self-blame had emerged because I was under the impression that my trauma experience was my fault.

Society tends to blame the victim, whether the victim is someone who has experienced domestic violence, sexual assault, mental illness, addiction, or homelessness. I bought into this idea and blamed myself for many years, often apologizing for things that did not warrant an apology. This is also something women tend to do, as we are conditioned by our culture to hold ourselves accountable for the actions of others and, often, to go through life feeling inferior. I turned to my yoga practice in order to feel safe, but, in so many of my classes, I often felt incredibly insecure and vulnerable. Yoga is fundamentally a practice of compassion, a rejection of ego, and a celebration of inclusivity—yet I found that many of my classes and instructors seemed fueled by criticism, judgment, and superiority. Yoga, the very practice that is meant to be about self-love and self-acceptance, caused me to feel scrutinized and subordinated.

“Yoga is fundamentally a practice of compassion, a rejection of ego, and a celebration of inclusivity…”

A lack of racial, socioeconomic, and body-type diversity in my yoga classes also caused me to feel self conscious, uncomfortable, and alienated. Many of the instructors I practiced with as a beginner were focused on the false, and rigid, notion that there is a right way and a wrong way to practice—and that everyone’s practice should be identical. I have struggled with body image for the majority of my life and spent many years despising my physical body. I am not someone who has a stereotypical “yoga body”, though I now realize there is absolutely no such thing. I often compared myself to the slender, pale skinned (not to mention upper middle class) women in my yoga classes. In New York City where I began practicing, yoga is incredibly lucrative and rather inaccessible to people of lower incomes, which often also means people of color. Here in the United States, yoga has become a product—and companies and publishers want to sell it. A lot of yoga magazines perpetuate a certain aesthetic and a false idea of what a yogi should look like—white, thin, attractive, affluent—which is extremely isolating for people who do not fit that description. Our society profits off of self-doubt and self-consciousness and it is an absolute shame that some members of the yoga community have capitalized upon that fact.

I became interested in trauma-informed (TI) yoga through my own experience with depression and trauma. My interest in this area was also fueled by my desire to extend the practice of yoga to people of all different races, classes, and body types. The practice of TI yoga, I would argue, is a manifestation of social justice. I am now a graduate social work student, planning to eventually combine TI yoga and mental healthcare. TI yoga, also known as trauma sensitive yoga, is very important for anyone working with trauma survivors. Most yoga instructors have worked with trauma survivors, whether or not they realize it. Most trauma survivors do not feel comfortable sharing their stories. There is a great deal of shame and stigmatization regarding trauma and mental illness. Being trauma-informed does not mean walking on eggshells all the time. However, having an awareness of trauma dynamics and being sensitive to them is absolutely imperative when teaching a practice that can be so emotionally stimulating.

Several months ago, I began volunteering with an organization called the Crossover Yoga Project (CYP), a non-profit organization that empowers at-risk teen girls through TI yoga and art therapy. The participants of CYP’s program are trauma survivors and, for many of them, sexual violence survivors. Young women are rarely taught that it is an option to say “no” and society often fails at teaching young girls (and boys, for that matter) about consent. I began working with this organization, based in Croton-on-Hudson, so that I could empower young women who shared some of my experiences and struggled with similar issues. As a woman now in my mid-twenties, I wish that more people had taught me about female empowerment at a young age. CYP’s curriculum emphasizes that trauma does not define a person’s worth and that it is possible to reclaim one’s identity.

For those of us who have experienced trauma, it is critical to reinforce that no matter what has happened in our lives, we can rise from the ashes of the past and embrace the future, strong and empowered. TI yoga is an incredibly empowering and inclusive practice that helps trauma survivors cope with their experiences. Finding what feels right for us, meeting ourselves where we are, and embracing our own individual practices are the pillars of TI yoga and CYP’s mission. CYP accepts that everyone is going to have a different practice because everyone has a different story, a different background, a different body, and a different mind—and this diversity is a beautiful thing.

Annie Bingaman is a Master of Social Work candidate at the Fordham University Graduate School of Social Service. She works with the Crossover Yoga Project, which offers trauma-informed yoga trainings throughout the Hudson Valley. 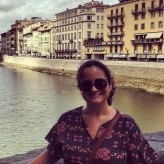 Annie Bingaman is a MSW candidate at the Fordham University Graduate School of Social Service. She works with the Crossover Yoga Project, which offers Trauma Informed Yoga trainings throughout the Hudson Valley.

The Social Justice Warrior's Guide to the Universe: 8 Non-Cheesy Self-Care Tips for Activists

Finding a yoga mat that fits