You know that feeling you get when you’re in a yoga class that’s going at a faster pace than you’re comfortable with and you struggle to keep up? You frantically try to hit all the poses the instructor cues, and halfway through you’re like, “Wait—have I even been breathing?!”

That’s how I felt making this Vegan Panettone. But not to worry—I felt that anxiety so you won’t have to. The panic and rushing was totally on me and my lack of preparation mixed with an excess of ambition and a change of plans on the fly. I also tend to get anxiety about anything that involves yeast doing its job, but that is generally quickly resolved by using fresh yeast. I have reordered the steps I took so that you aren’t running around doing everything at once like I did. Those cooking shows that have all their ingredients lined up in tiny bowls have the right idea, especially for something as precise and scientific as baking.

This recipe is a piece of cake… a vegan version of panettone: a Milanese sweet, leavened bread traditionally consumed around the world at Christmastime.

As always, to decrease new recipe anxiety, I recommend you read through all of the ingredients and instructions a couple of times before diving in. You can even rearrange the steps as you like. For example, if you’re feeling rushed because your yeast is proofing quickly, you can feel free to skip prepping the fillings completely and focus on the dough. Then, you’ll have an entire hour or two to prepare the nuts, fruits, chocolate, and zests. If you do that, you’ll only need one giant bowl for the first rise. After that, you can divide the dough in two, knead in the distinguishing flavors, and place everything in the baking containers.

This recipe is really a piece of cake—a piece of Italian bread cake. It’s a vegan version of panettone: a Milanese sweet, leavened bread that is traditionally consumed around Christmas time in Italy and other European countries as well as Latin America. My husband is Brazilian and is fond of the more modern chocolate panettone. I wanted to make both the chocolate and dried fruit versions, so this recipe is for one base dough split in half and mixed with the different fillings.

Professional panettone breads are made with dough that is proofed for days, similar to making a sourdough, but this version we are making only needs to rise for relatively short amounts of time. If you are an experienced bread maker who wants to experiment with using a starter, be my guest—apparently it extends the shelf life if you do it that way. Another thing that the professionals use that I did not have are panettone papers or molds. Panettone is a very specific shape—cylindrical and fairly tall, especially after the rise. I did not have anything in the six-inch circumference range, and didn’t feel like dropping $35 on a mold or tracking down where to acquire these specialty baking papers. In the end, I used ramekins, like the ones you make creme brûlée in. Most of those I got from the target dollar section.

I hope you enjoy this recipe and have a fantastic holiday season! 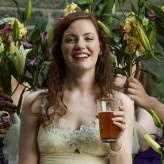 Turning Opponents Into Allies: How to Discuss Politics the Mindful Way